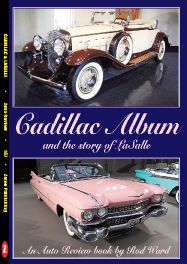 Cadillac division of General Motors was the biggest producer of luxury cars in the USA, and held that position for a century. It was also one of the earliest US car marques, reconstructed in 1902 by Henry Leland from the Henry Ford Co, after Henry departed. The name came from the French founder of Detroit, Antoine de la Mothe Cadillac, whose coat of arms formed the basis of the Cadillac crest. General Motors acquired the firm in 1909, retaining Henry Leland and his son Wilfred to run Cadillac. Their consistently high engineering standards and interchangeability of components enabled modern mass production techniques to evolve. The Lelands left in 1917 after a disagreement with Durant. Cadillac maintained its position as the top-selling American luxury car through the 1920s and 1930s, with V8, V12 and V16 models, and it gained a smaller brother, called LaSalle. After the Second World War, Cadillac re-established itself as the top US luxury car brand by volume, and began the road to excess which culminated in 1959 in a blizzard of chromework and towering fins. As styling subsided into a more sober and tasteful period in the 1960s and 1970s, Cadillac found itself under threat from imported luxury cars, and even from Ford’s resurgent Lincoln division. Some design mis-steps in the late 20th century saw Cadillac’s previously unassailable market position under threat, but a relaunch in the 21st century would mean a rebuilding of the quality image characterised by the Cadillac brand.