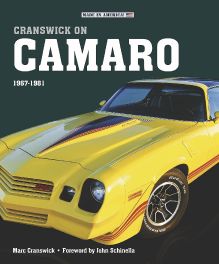 Chevrolet was Number One in the sales race. If you needed a car, chances are Chevrolet made it. However, in 1964 there arose a problem. Some guy at Ford came up with a car called the Mustang, maybe you've heard of it? But don't worry, Chevrolet had a solution called the Camaro. In racing, where you are on lap one, isn't nearly as important as your position when the checkered flag falls. By 1981, Camaro was so far in front of Mustang, Henry needed binoculars to see the Z28's taillights! Camaro was part of the speed shop scene, modified by the most famous names of the muscle car era. In racing, Chevrolet's pony left no stone unturned, inside and outside America. With the fuel crisis, insurance, and inflation, America sought a new kind of coupe. The Bowtie boys even outsold Mustang, with that Z28 having the upper hand in the Chevrolet versus Ford rivalry. Chevrolet's dedicated coupe even outfoxed Ford's sedan based Mustang. If the Corvette is the King of American Sportscars, then 'The Hugger' must be the Prince of Ponies!