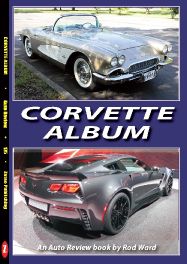 One and three-quarter million Chevrolet Corvettes have been produced over eight decades, all two-door, two-seat sports cars, and in eight distinct generations. The generations are usually abbreviated to the concise C1 to C8, so we use those same classifications in this publication. The Corvette began as a little two-seat two-door sports car with a modest 150hp six-cylinder saloon car engine and a GRP body. The Corvette was not expected to have a long life, and indeed it was considered for extinction by General Motors more than once, as its production volumes were tiny compared with other GM products.  It survived, however, with ever-larger V8 engines and sometimes extravagant body styling.  It became a ‘proper’ high-performance sports car, though its evolution was hobbled to some extent by emissions regulations from the 1970s onwards.  The Corvette went on to establish itself as the performance flagship of the General Motors range, evolving into a 500hp mid-engined supercar in the 21st century. This is the second General Motors US-made car marque to be covered in the Auto Review series (the first was Cadillac). ‘Overseas’ GM brands have already been covered in Auto Review (Opel Vauxhall, Holden) and other North American GM marques will be described in future Auto Review publications.