A Century of Preston Bus Routes 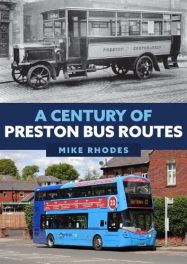 A Century of Preston Bus Routes

Preston Corporation Tramways began operation of electric trams in June 1904, and they exclusively served the town until 1922. Additional tram routes to Frenchwood and Fulwood had been mooted several times, but the latter had been rejected on a number of occasions due to the narrowness of some of the highways on the proposed route. Consequently, the route to Fulwood was inaugurated on 23 January 1922, using motorbuses. The trams were abandoned between 1932 and 1935 when the six routes were converted to motorbus operation. Before the Second World War additional bus routes were started to serve new housing developments. Post-war routes were commenced to serve further new housing at Brookfield, Ingol, Larches, Lea, Moor Nook and Ribbleton. A Joint Operating Agreement was entered into with Ribble Motors (and Scout Motors) on 1 January 1948. There were initially four routes involved, with three more being added over the next twenty-five years. This agreement continued in diminished form until deregulation in 1986, following which the route network rapidly expanded. In more recent times, following the brief tenure by Stagecoach, Rotala Preston Bus has also operated a diverse number of services on behalf of Lancashire County Council, which over recent years has involved routes to many of the surrounding Lancashire towns.