Whatever Happened To The Gold Cup: The Mid-Cheshire Years 1954-1974 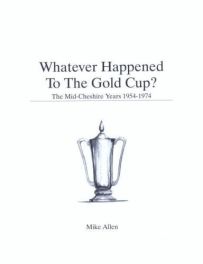 Whatever Happened To The Gold Cup: The Mid-Cheshire Years 1954-1974

The International Gold Cup race was awarded annually to the winner of a motor race, often Formula One, at Oulton Park in Cheshire, England. Although one of a number of non-championship race meetings across Europe which attracted top teams and drivers the Gold Cup was unique in that for many years it was run by a motor club that was not a national organization, the Mid-Cheshire Motor Club and latterly the Mid-Cheshire Motor Racing Club. Mid-Cheshire are still the only non-national club to hold an International Licence Formula One race meeting. Today the Gold Cup meeting is a major historic event which caters for many of the cars mentioned in this book, and some cases even the drivers! The meeting always tried to promote new ideas in motor racing, such as the introduction of new formula. This sometimes led to some rather thin grids but the support races often made up for the lack of formula cars in the main event. 40,000 people sometimes turned up for this meeting which severely challenged the country lane road system around the circuit but people kept coming and they witnessed many historic events such as the only time a 4WD vehicle won a Formula One race and the race debut of the Tyrrell-001. The title came about from the “disappearance” of the Gold Cup in 1969 when it wasn’t returned in time for the 1970 event. Research has shown that there have actually been a number of Gold Cups, one of which was silver! "a charming snapshot borne of genuine passion" Autosport. "If you enjoyed the book Forgotten Races then this is the one for you" Simon Lewis Transport Books, "This is a publication that should grace the bookshelves of anyone who enjoyed those brilliant times" Mike Hayward "The author must be congratulated on a splendid effort in producing a completely unique and important work" Society of Automotive Historians.